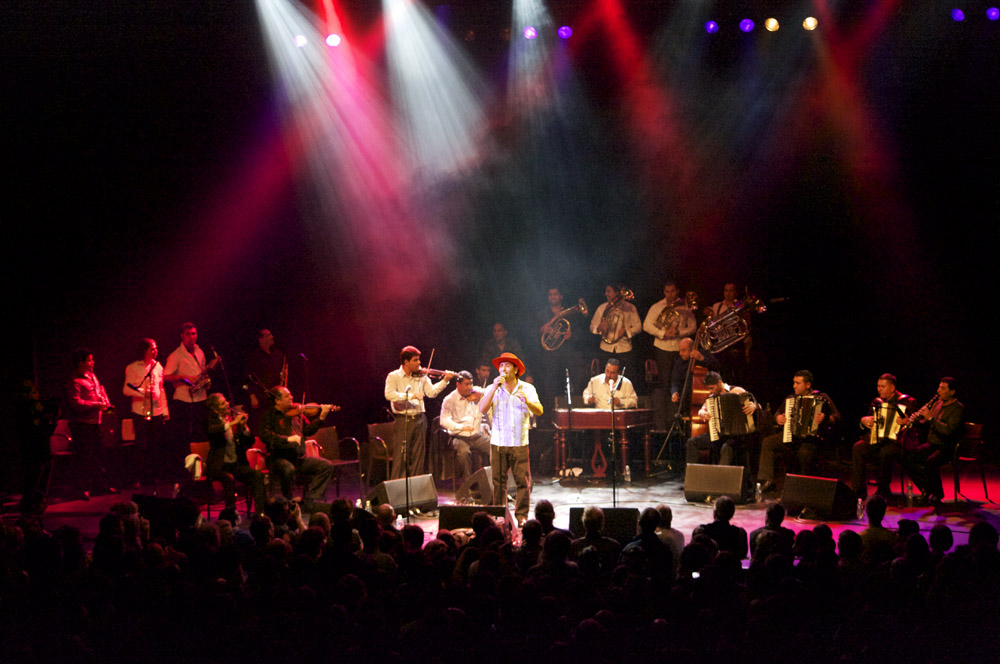 Taraf de Haïdouks and Kocani Orkestar are undoubtedly two of the most famous and emblematic Balkan Gypsy bands. Started in 1991 in the small Romanian village of Clejani, the “band of honourable brigands” (that’s the literal translation of “Taraf de Haïdouks”) is celebrating its 20th anniversary this year by launching an ambitious project: a kind of Balkan big band, in which the 13 Taraf musicians and singers are joined by the 13 members of Macedonia’s Koçani Orkestar, one of the top brass bands around. Together, they have recorded a new album, and will be touring from the spring 2011 on.

The name of this collaborative project, BAND OF GYPSIES, is (among others) a reference to Taraf de Haïdouks milestone 2001 album, which included three tracks in collaboration with Koçani Orkestar. This time the plan is more ambitious: all the pieces of this entirely new repertoire are written, arranged and performed by an impressive, 26-piece orchestra, which explores all the contrasts between the two bands’ rich, respective textures. The swirling and fiery violins, cimbalums and accordions of Taraf de Haïdouks are engaging in exciting combinations and interplay with the mighty, funky brass and percussion of Koçani Orkestar.

The compositions dig deep into the various sources which have been inspiring the two bands for years: traditional music from the Romanian countryside, urban Balkan pop, medieval ballads, so-called oriental brass band music, Turkish,Jewish, Greek and even Indian influences… It’s therefore an album which gathers elements from all over the Balkans, from Romania, Macedonia and Serbia to Bulgaria, Turkey and beyond, all weaved into powerful and sophisticated arrangements.

BAND OF GYPSIES (the band and the new album) is a project based on encounters and exchanges, in more than one way. In twenty years of existence, Taraf de Haïdouks has seen a generational change. Three of the oldest members have passed away, the former “young guard” has reached middle age… but the group now includes no less than four young musicians, sons of four of the band members. Koçani Orkestar has also rejuvenated itself in a spectacular way during the past two years, with the arrival of several brilliant musicians who are in their twenties.