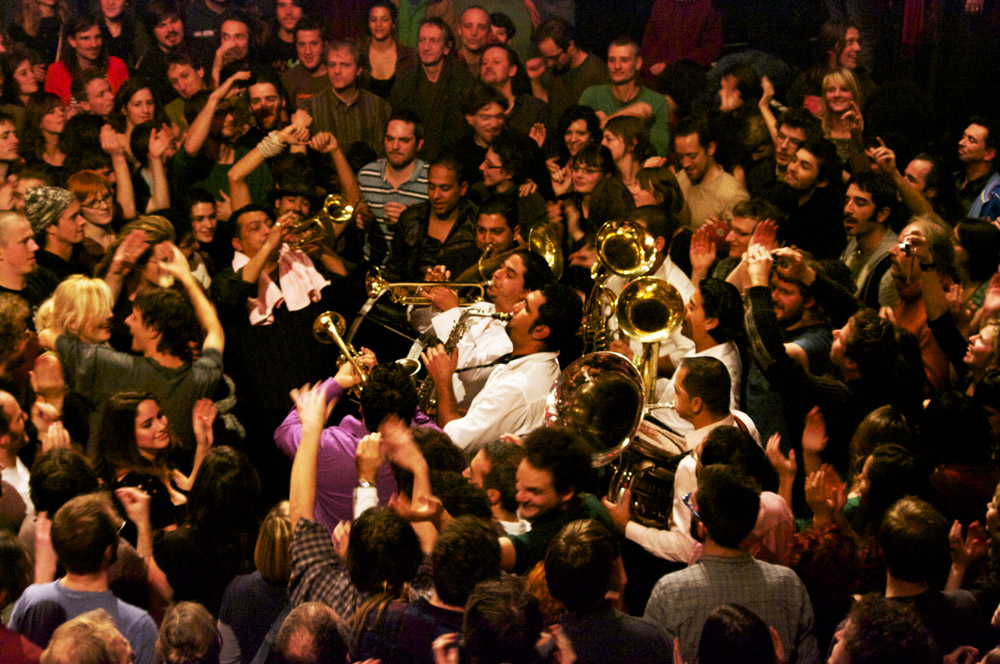 The mighty Macedonian brass band took the Western world by surprise in 1997 with their album “L’Orient est rouge”.

The band’s trademark thundering style soon became very popular: their powerful rhythm section (drummer + four tubas), their passionate soloists, and the sheer funkiness of their beats would lead any audience to break into dance… despite the fact that Koçani Orkestar use many asymetrical rhythms, those 7/8 or 9/8 time signatures sometimes called “Aksak” in traditional Turkish music.

The Koçani Orkestar hails from the town of… Koçani, and was founded by trumpet player Naat Veliov. As showcased in “l’Orient est rouge”, the band’s original repertoire was based on Gypsy tunes from various parts of the Balkans and on Turkish/Bulgarian rhythms, with a sprinkle of Latin flavour.

The band’s popularity rose to new heights with the release of Alone At My Wedding, for which their line-up was rejuvenated: original trumpet player Naat Veliov left (and formed a splinter band, called “Naat Veliov’s Original Koçani Orkestar”), and several younger players joined the band. The repertoire transcended the strict boundaries of the brass band genre, with the exploration of “salon music” played during wedding parties in Macedonia, and the integration of more subtle instruments such as darbuka, banjo and clarinet.

This album became a favourite among young artists in the US and the UK, most notably the budding indie rock sensation Zach Condon aka Beirut, who covered several Koçani Orkestar tunes, constantly referenced them in his interviews and even performed with them at a special concert for La Blogotheque in Paris.

Koçani Orkestar have also been championed by artists as diverse as Balkan Beat Box and Cibelle, and have had tracks remixed/reinterpreted by prominent artists in the fields of world music, electronic and rock music (from Señor Coconut, Animal Collective, Lightning Head and Susheela Raman to Mercan Dede, Smadj and Buscemi), all of which helped them gain a wider audience, as did the inclusion of one of their tracks in the soundtrack to the movie Borat.

The Koçani Orkestar’s latest album is “The Ravished Bride”. It contains romantic and epic love songs exploring new directions in Balkan pop, and a series of exciting instrumental pieces leaning towards what could be described as ’60s spy movie themes or surf music.

Koçani Orkestar have performed at many major world music festivals around the world. They have collaborated with Italian singer Vinicio Capossella, with jazz trumpet player Paolo Fresú, and with Taraf de Haïdouks, who invited them to Bucharest to perform on their Band Of Gypsies live album.