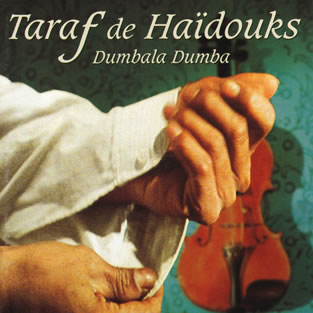 Taraf de Haïdouk’s third album was recorded in their home environment of Clejani and in nearby Bucharest. Just like its predecessors, it was produced by Stefan Karo, Michel Winter and CramWorld producer/engineer Vincent Kenis. But this time the Taraf have invited a series of guests to appear with them: the musicians from Mîrsa with their characteristic call-and-response vocal style, the ursari (who descend from the brotherhood of the bear-tamers), Rosioru, the master of Valachian Gypsy crooners, as well as Viorica, a remarkable female vocalist. Great performances by these musafirii (guests) and by the entire, regular line-up of the Taraf all contribute to make Dumbala Dumba a fresh, warm, intimate and poetic album…

“Dumbala Dumba” was number four in World Music Charts Europe for the year 1998.

“I recently met them during the shooting of ‘The Man Who Cried’. For me they are a model in the way they approach life. Despite all that they went through — I’m talking about racism against Gypsies which went on for centuries and still exists today — these guys can play a music which express the most intense joy. They have this gift to make you feel alive. They are among the most extraordinary people I ever met.” Johnny Depp (in Studio Magazine, France, Jan. 2000)

“Taraf de Haïdouks is one of my very favorite groups. Their passionate, earthly sound is filled with ecstasy and sadness. They take their listeners to the essence of music: that place where the bow meets the string and a world of action follows. As a member of Kronos I admire the wealth of feelings Taraf de Haïdouks create. As a violonist I love this wild place they inhabit.” David Harrington, Kronos Quartet