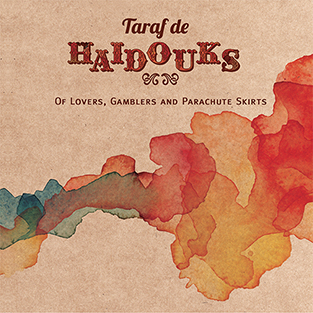 To celebrate their 25th anniversary, acclaimed Rom band Taraf de Haïdouks are revisiting some of the old styles which have enchanted Western audiences on their earlier albums: Gypsy love songs, poignant Romanian ballads and old-school dance tunes, alongside those Turkish-flavoured instrumentals they’ve grown to love. Let’s all join the party!

For the first time since the sad demise of their oldest vocalists (Ion Manole, Neculae Neacsu, Cacurica and Ilie Iorga), Taraf de Haïdouks are revisiting some of their ancient styles, and are taking a retrospective look at their career. Some of their former collaborators have been re-enlisted, such as superb vocalists Tsagoi (the son of the legendary, late Neacsu) and Gheorghe Manole (who has mastered the repertoire of his father, the great Ion Manole), as well as the flamboyant Viorica Rudareasa, the woman who sang the band’s iconic song “Dumbala Dumba”.

Thus does the Taraf de Haïdouks’ music keep morphing: far from being a fixed, monolithic canon, it has been absorbing and recycling old & new elements. The band was formed back in 1990, by individual musicians who, until then, had only been playing in various combinations at the village’s social rituals (baptisms, weddings, funerals, harvests etc). By then, ‘foreign’ accordions had already found a place amidst the violins and cymbalums, and the repertoire of the lautari (traditional Rom musicians) was peppered with cabaret flavours from the city. Then came Turkish melodies and rhythms and, more recently, the influence of popular urban manele (which actually derives frommanea, an old ‘oriental’ lautar style).

The harmonies and structures became more complex, the playing more virtuosic, and the balance between vocal and instrumental pieces gradually shifted in favour of the latter. In this anniversary album, Taraf de Haïdouks have weaved it all back together into a rich tapestry of styles, which pays tribute to their parents’ generation.