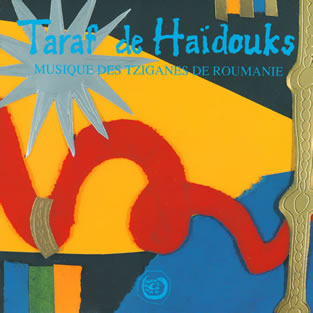 Released in 1991, this was the first album by the Taraf de Haïdouks. They had never performed outside their region before they were “discovered” by Stéphane Karo & Michel Winter, two young Belgian music fans who fell in love with their music during a trip to Romania in 1990, and who decided to try to share this passion with the rest of the world…

Shortly after their visit, Karo & Winter managed to organise a few concerts in Belgium, and they introduced the band to Crammed Discs. “Musique des Tsiganes de Roumanie” was recorded right away, during that first visit in Belgium. It introduced Western listeners to the rich musical world of the Romanian Gypsies, which includes medieval ballads, Turkish-flavoured dance tunes from the Balkans, and characteristic vocal inflections which are reminiscent of the Gypsy people’s origins in the Indian sub-continent.

The album was greeted with enthusiasm by public and media alike. It immediately topped the European World Music Chart, and the Taraf de Haîdouks started touring all over Europe. Their warmth, their eccentricity and their sheer pleasure of playing quickly conquered even the most blasé audiences. They proved to be equally at ease in concert halls, on the stages of major festivals (Montreux, Womad, Bourges, Roskilde, the Barbican Centre etc.) or during their all-night playing and busking sessions in bars or on the streets…

In 92 the Taraf were invited to perform and record with Swiss pop star Stephan Eicher, appeared on TV with Yehudi Menuhin, and played a prominent part in French/Gypsy director Tony Gatlif’s acclaimed film “Latcho Drom”, which won awards at the Cannes Festival and the Midem Audiovisual Awards among others.